What part does luck play in the success or otherwise of community programmes? Those of us who work in development would probably not admit to much. But sometimes the bad luck that affects the rural poor would make you cry.

Last week I visited a rural development programme which assists nine communities on the slopes of Telica volcano, in Western Nicaragua. Local NGO Nuevas Esperanzas has been doing great work here for the last ten years, improving access to water, gradually working to diversify crops and diet in the zone and, if possible, to look for income generation activities.

Agua Fria housing with the volcano in the background

‘These villages are very isolated’, Carlos told us, as we bumped along in a pick-up filled with fertiliser and other agricultural inputs. This became apparent as we climbed steadily up the slopes of Telica, an occasionally active volcano. As we came within a few hundred metres from the summit I asked myself why farmers would want to live up here. Sadly though, all over the world we find the poorest people have to live on the most marginal lands. In some cases putting themselves in danger, on the edges of rivers, near hazards, and on flood plains. The same in Central America, the poorest peasants make their homes on steep slopes while the better-off farmers have captured the good land in the valley bottom.

Agronomists from Nuevas Esperanzas spent the day advising farming families on new methods and new crops, to add variety to the standard crops of maize and beans. Small farmers groups are experimenting with pineapple and dragon fruit. We visited three ‘model farms’, and came away with some of the new fruit. But there are no magic bullets in development, and all new crops are approached with caution by campesinos with limited access to land.

The new fruits can be used locally for juice – the vitamins are good for children’s diets and development. But small farmer tastes are conservative in Nicaragua, and some families have said they ‘don’t like it’. If the dragon fruit won’t be drunk by local families, can it be sold? Not easily, not when the nearest market is 40km away and your only transport is a horse. There are solutions to all these problems, but they will take some ingenuity, and crucially, the local people have to be convinced that the benefits of fruit make it worthwhile to set aside some of their precious land and labour.

We saw some excellent water systems, where communities and engineers have brought fresh water from many kilometres away. And many houses and churches now have rainwater harvesting tanks. Maria Eugenia told me she has had hers for four years now and it lasts the family for three months into the dry season. That is 3 months in which her children don’t have to make an hour long round trip on a horse to bring back four small water containers from the spring. 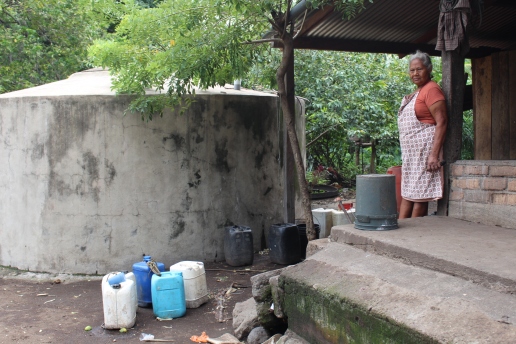 And so on to the great new hope: Tourism. Tourism is a growing industry and many visitors come on day-trips from the town of Leon. But they bring everything with them from the town, the guide, their lunch, and drinks. The tourist trade at present brings little benefit to local people. After consultation with the community, Nuevas Esperanzas embarked on their largest project, to build a hostel and café. If visitors ate in the region, and slept overnight so they could see the dawn, then significant benefit would come to the local people, bringing employment for guides, cooks, local produce etc.

The site of the hostel was chosen carefully. The volcano does occasionally throw out rocks (incandescent ballistic projectiles as they are technically known) – but never this far from the crater.  ‘Speaking to local people, they told us that never in memory (50+ years) had rocks landed in this area’.  Telica has had small eruptions on and off over the years but never affected this site. 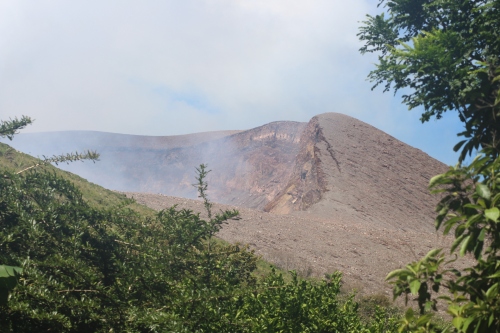 The project was a success, funded by the European Union, and the building was finished in November. The EU sent an auditor on a Monday, who saw the work was good, and signed off the project as finished.  What could possibly go wrong?

So yes, you guessed it. The following day, at 9 in the morning, bang! Telica active, ash spewing out, land shaking, and then a crash, as rocks as big as buckets were shot out by the volcano – towards the hostel and the community. Incredibly over fifteen rocks hit the hostel directly, landing on the roof, smashing holes in it, smashing the cement of the water tank. Bad luck for the community of Agua Fria? Or good luck because no-one was sleeping there yet, no one was killed.

Looking up at the roof of the hostel/cafe

The event was not only unheard of for Telica, it appears to be one of the most extreme events of its kind (phreatic eruption with large projectiles) reported anywhere.  Rocks weighing at least 4 tonnes travelled (airborne) more than 400 metres from the crater and smaller rocks reaching over 1.5 km. For more details on a similar event see YouTube

The volcanic activity lasted 15 minutes, but that was long enough to kill the project dead. The building sits there today, a shell that can’t now be used because the government has declared it is too dangerous. The community members ran for their lives that day, and later returned to their homes where they remain today. If you are poor in Nicaragua you have little choice as to where you can live. 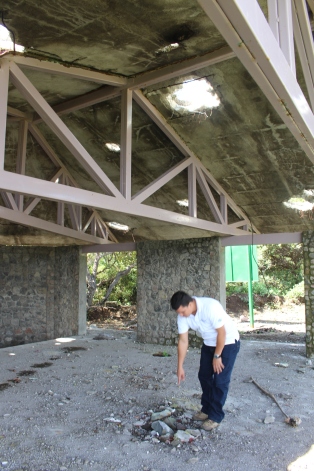 So there ends the tale…Or does it? The tourists keep coming – they are wise enough to assess risk, work out the probabilities. They do the same before bungee jumping or white-water rafting. So the Leon travel companies keep making money. Some of the community are now saying that they were unlucky once, they couldn’t possibly be unlucky again. “Patch up the roof of the hostel and let’s get going” says one. It might have to be illegal for a year or so at the beginning, because of the safety regulations. “But most new businesses in Nicaragua are illegal at the beginning”. Things sort themselves out later if the business is a success.

What option to take, to leave it closed or try again? Maybe some local underemployed young people might be prepared to cut some corners and take the risk. Maybe the new business can bring a sustainable income stream into the community. But a legally-registered NGO would have to think twice, or more, before taking that risk. What would you do?

Please use the Comments tab to give us your views…